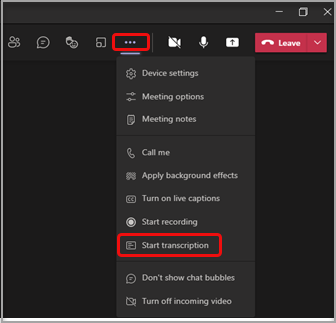 Microsoft Teams live transcription can identify each speaker, and captures audio in 'near real time' to provide a record of what's said during and after the meeting.

'Delivering live transcription with high accuracy, minimal latency, and cost efficiency at enterprise scale has been one of the toughest challenges in the industry,' says Microsoft's Shalendra Chhabra, the lead on conversational AI for Microsoft Teams meetings.

'Over the last two years we've made significant strides in solving this problem and have dramatically improved our models for accuracy using meeting context in real time and cutting edge AI.'

To identify speakers, the Teams live transcription feature uses a meeting's invitation, participant names and attachments to improve recognition of specific lingo in a meeting and transcribe audio.

The transcriptions appear in a column on the right-hand side of the Teams desktop app and are linked to each participant's avatar.

The transcription files are then stored in the meeting organizer's Exchange Online account. Only the organizer and tenant admin have permissions to delete it.

Chhabra assures users that the live transcription service will not allow Microsoft employees to pry on confidential business discussions. Microsoft employees cannot see the meeting's contents, the models are deleted immediately after each meeting, and Microsoft doesn't use data from meetings to improve its AI, he says.

The feature is currently only supported on the Teams desktop app and is tailored for US English. A transcript is available on the desktop app in a tile labelled 'Meeting Transcript' or via Teams on the web. 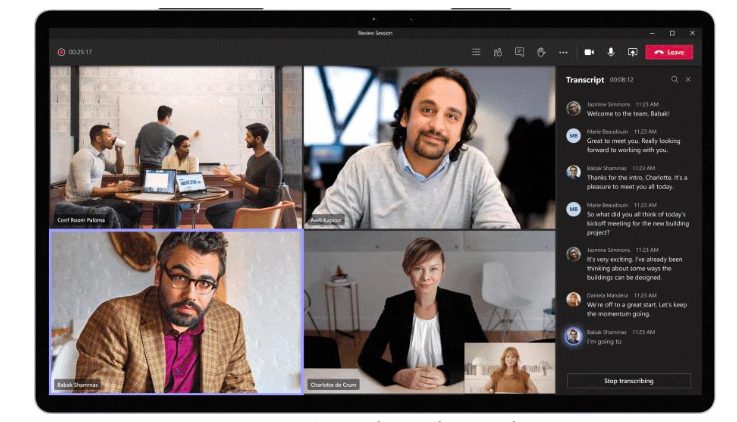 In theory, Teams users with a free account can still get live transcriptions by using Teams through Google's Chrome browser. But, unlike Teams for enterprise customers, Chrome doesn't create a post-meeting transcript of the conversation. However, Chrome can create captions for locally stored audio and video files on top of social and video sites, podcasts, and radio content.

To use Live Caption in Chrome, users need to go to Settings and click on Advanced in the left menu. The feature can be enabled from the Accessibility panel.

In Microsoft Teams, users can record their Teams meetings and group calls to capture audio, video, and screen sharing activity. There is also an option for recordings to have automatic transcription, so that users can play back meeting recordings with closed captions and search for important discussion items in the transcript. The recording happens in the cloud and is saved to Microsoft Stream, so users can share it securely across their organization.

For information about using roles in Teams meetings, and how to change users' roles, see Roles in a Teams meeting. For live events recording options, see Live event recording policies in Teams.

For a Teams user's meetings to be recorded, Microsoft Stream must be enabled for the tenant. In addition, the following prerequisites are required for both the meeting organizer and the person who is initiating the recording:

Users won't need a Microsoft Stream license assigned if you want users to only record and download the recordings. This will mean that the recordings aren't stored in Microsoft Stream but are instead stored in Teams Async Media Services (AMS) with a 21-day limit before it's deleted. It's not something at this point that an admin can control or manage including the ability to delete it.

Also note, for recordings that are on AMS, the recording retention is affected by the chat message itself. As such, any deletion of the original AMS Recording chat message will prevent users from being able to access the recording. There are two scenarios that can affect this:

Set up Teams cloud meeting recording for users in your organization

This section explains how you can set up and plan for recording Teams meetings.

Turn on Microsoft Stream for users in the organization

Make sure users have upload video permissions in Microsoft Stream

By default, everyone in the company can create content in Stream, once Stream is enabled and the license is assigned to the user. A Microsoft Stream administrator can restrict employees for creating content in Stream. The users who are in this restricted list will still be able to record meetings, however, their recordings will not be sent to Stream. These recordings will instead be temporarily stored on AMS for 21 days. During which time, the recording must be downloaded before it is deleted at the end of those 21 days.

Notify employees to consent to company guidelines in Microsoft Stream

If a Microsoft Stream administrator has set up company guideline policy and requires employees to accept this policy before saving content, users must do so before recording in Microsoft Teams. Before you roll out the recording feature in the organization, make sure users have consented to the policy.

Turn on or turn off cloud recording

You can use the Microsoft Teams admin center or PowerShell to set a Teams meeting policy to control whether user's meetings can be recorded.

In the Microsoft Teams admin center, turn on or turn off the Allow cloud recording setting in the meeting policy. To learn more, see Meeting policy settings for audio & video.

Note that both the meeting organizer and the recording initiator need to have the recording permissions to record the meeting. Unless you have assigned a custom policy to the users, users get the Global policy, which has AllowCloudRecording enabled by default. 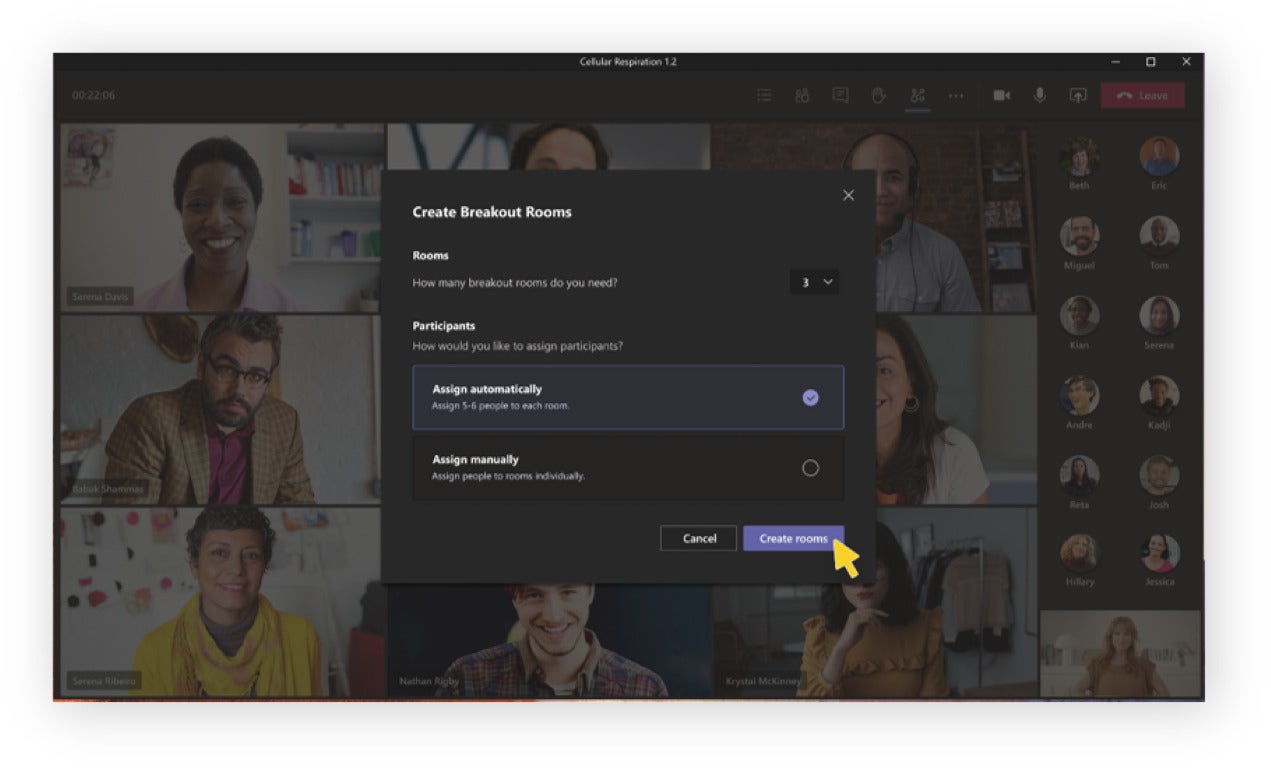 For more information about using Teams roles to configure who has permission to record a meeting, see Roles in a Teams meeting.

For a user to fall back to the Global policy, use the following cmdlet to remove a specific policy assignment for a user:

Where your meeting recordings are stored

If your Teams data is stored in-country and you prefer to store meeting recordings in-country, we recommend that you turn off the feature, and then turn it on after Microsoft Stream is deployed to your in-country data residency region. To turn off the feature for all users in your organization, turn off the Allow cloud recording setting in the Global Teams meeting policy, which is in the Microsoft Teams admin center. If, however, you still wish to enable recordings to be stored in the nearest geographic region for Microsoft Stream, you must turn on both Allow cloud recording and Allow Recording Storage Outside Region before this change takes place.

To enable recordings in-region in the Global policy, use the following cmdlet:

Here's a summary of what happens when you turn on meeting recording when this change takes effect:

To learn more about where data is stored across services in Microsoft 365 or Office 365, see Where is your data located?

Turn on or turn off recording transcription

That transcription for recorded meetings is currently only supported for users who have the language in Teams set to English and when English is spoken in the meeting. They are stored together with the meeting recordings in Microsoft Stream cloud storage.

You can use the Microsoft Teams admin center or PowerShell to set a Teams meeting policy to control whether the recording initiator gets a choice to transcribe the meeting recording.

In the Microsoft Teams admin center, turn on or turn off the Allow transcription setting in the meeting policy. To learn more, see Meeting policy settings for audio & video.

Unless you have assigned a custom policy to the users, users get the Global policy, which has AllowTranscription disabled by default.

For a user to fall back to Global policy, use the following cmdlet to remove a specific policy assignment for a user:

Compliance and eDiscovery for meeting recordings