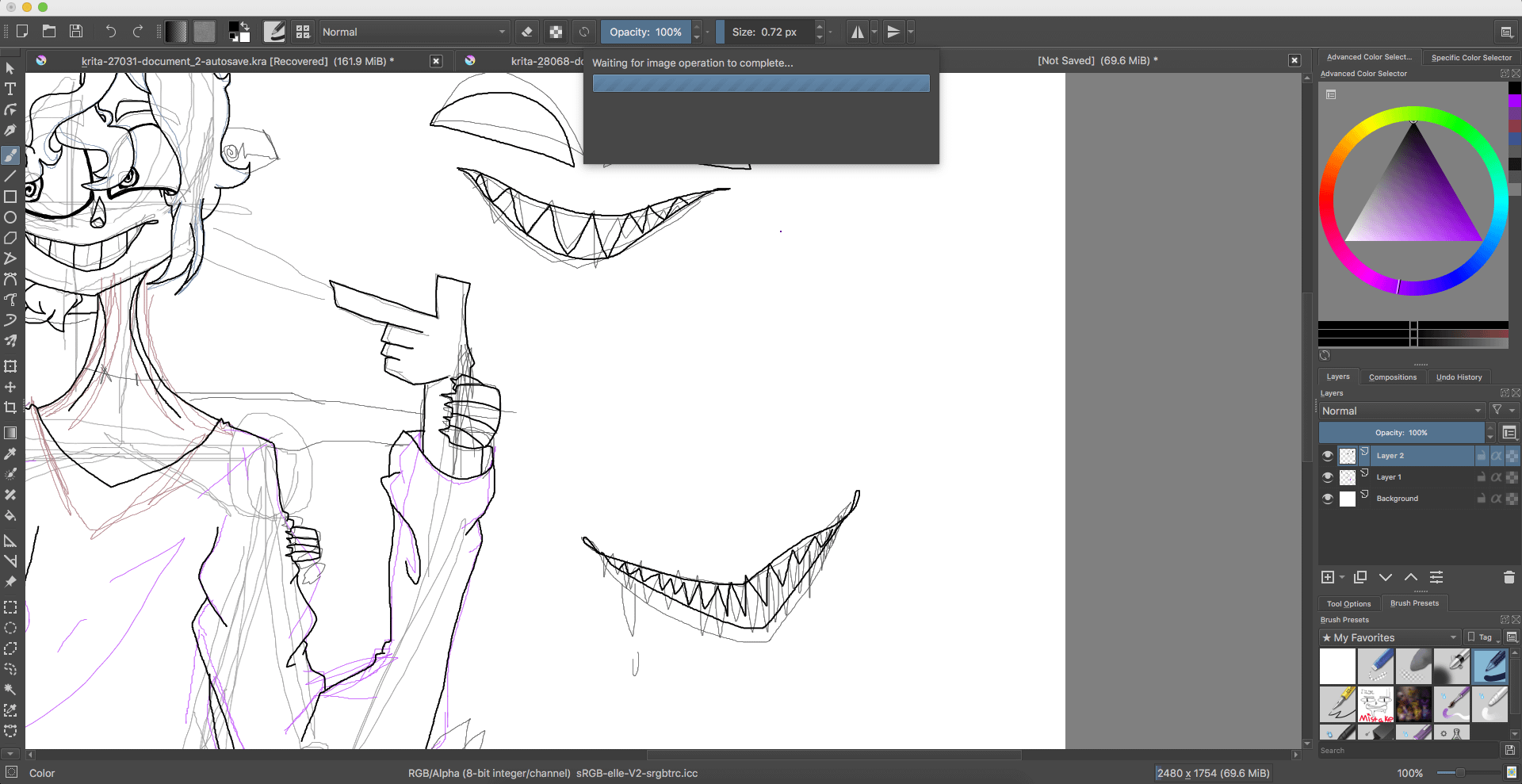 Mention your operating system (Windows, Linux, Macos, Android or ChromeOS). Mention the version of Krita you are using to trigger the problem. If people believe you have found a real bug in Krita, please then file a bug report. Read the guide to report a bug.

Today, the Krita team has released Krita 4.4.2. With over 300 changes, this is mainly a bugfix release, though some key new features, too!

Mesh transforms will greatly speed up your concept by allowing complex transformations, such as the half-rounded grate on this window!

But the gradients are not the only mesh related feature! This release also sees the first iteration of the mesh-transform. Like the gradient mesh, the mesh transform consists of bezier patches that can be individually shaped to create precise transforms, especially useful for rounded objects. Not shown in the above screenshot: you can optionally show the handles of each bezier curve making up the mesh for even more precision and control!

We’re still tweaking this one, but currently the shortcuts are the following:

The gradient fill layer and the new gradient editor in action. 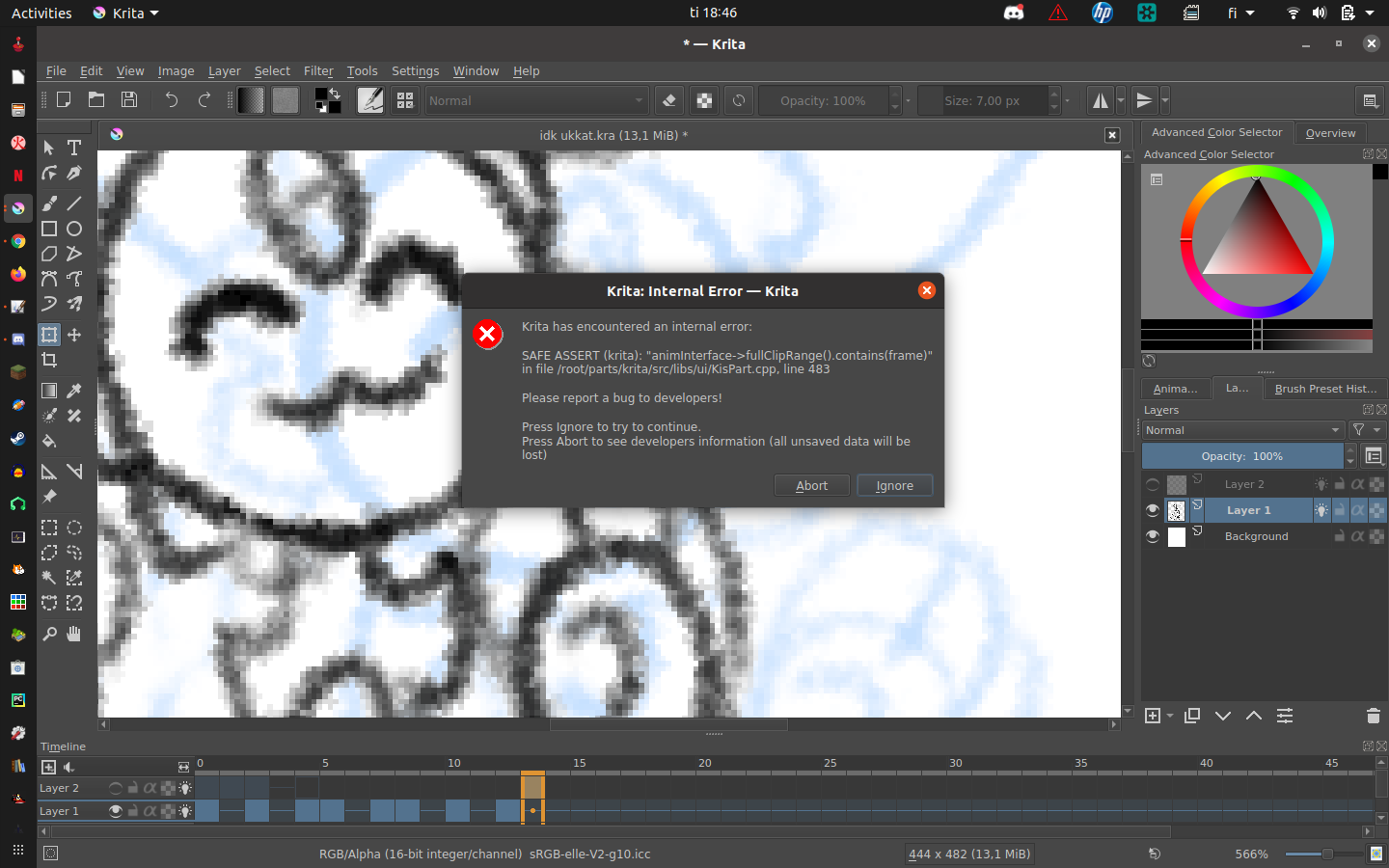 Deif Lou added a new gradient fill layer type, this one will make it easy to quickly create a variety of gradients non-destructively. With it, he also made an important usability fix: Gradients in Krita could be either segment type, or stop type, with different features each, and different editors each. That could get quite annoying if you were working on a gradient, but you realized you had the wrong type! This is now fixed, as both gradient types can now be edited by the same editor, which also converts between the two.

Deif Lou also created a new halftone filter. The old filter was slow and could not be used as a filter mask, and could only show dots.

The new halftone filter can do per-channel filtering, useful for vintag effects and maybe even printing!

The new filter can handle being applied as filter layer, per-channel filtering, and the pattern itself can be generated with any of the fill layer options, giving endless combinations.

A small feature that allows you to only paste the style of the copied vector shape onto other selected vector shapes. This feature can be found under the edit menu, or assigned a shortcut in the shortcut settings.

A Toolbar Button for Wraparound Mode

Originally, we had a shortcut, W, that enabled Krita’s Wraparound mode, one of the features Adobe copied this year for the next release of Photoshop.

But too many people pressed the shortcut by accident and were then confused and thought Krita had gone crazy… So we removed the shortcut, but now nobody could find it anymore. That’s why in this release, we have added a button to the toolbar that activates wraparound:

Please don’t press it by accident!

There are also six new brushes by Ramon Miranda, meant to show off the new RGBA brush tip feature:

Most animation work is going in the master branch, which will become Krita 5.0.

If you’re using the portable zip files, just open the zip file in Explorer and drag the folder somewhere convenient, then double-click on the krita icon in the folder. This will not impact an installed version of Krita, though it will share your settings and custom resources with your regular installed version of Krita. For reporting crashes, also get the debug symbols folder.

(If, for some reason, Firefox thinks it needs to load this as text: to download, right-click on the link.)

Note: the gmic-qt is not available on OSX.

This time, the Android releases are made from the release tarball, so there are translations. We consider Krita on ChromeOS and Android still beta. There are many things that don’t work and other things that are impossible without a real keyboard.

The Linux appimage and the source .tar.gz and .tar.xz tarballs are signed. You can retrieve the public key with gpg: “gpg –recv-key 7468332F”. The signatures are here (filenames ending in .sig).

Krita is a free and open source project. Please consider supporting the project with donations or by buying training videos! With your support, we can keep the core team working on Krita full-time.