I recently purchased the FlyJSim 732 Twinjet (A 737-200 aircraft model for the X-Plane flight simulator). I eagerly googled the usual forums for add-on liveries, and was quite disappointed I didn't find any Malaysian ones. In particular, I was looking for a specific paint scheme -- the original livery used by Malaysian Airline System (MAS) when it first launched in 1972. The 737-200 formed the mainstay of MAS's regional fleet -- consisting of up to 23 units -- before they were replaced by the newer 737-500s in 1994.

Join me in the flight deck live as we cruise the Caribbean in the FlyJSim 737-200! Starting off at Norman Manley in Kingston, Jamaica (MKJP) we’ll be initial.

(that's a beautiful picture of 9M-MBF with the Concorde at Paya Lebar airport, Singapore)Another view:

The FlyJSim 737 is great to fly. It's got a few spots where I doubt its accuracy (engine start sequence + the SP77) but it looks great and performs well. As for the CIVA INS, I came into contact with the CIVA through the excellent FS Labs ConcordeX. In the FlyJSim Twinjet, experience the origins of the 737. You will feel comfortable in a familiar design language, whilst taking on the challenge of VOR and CIVA. operations, whilst adopting a more hands-on approach to flying. This is the perfect aircraft to get back to basics, without the stress of being task-saturated.CIVA sold separately.

(Sadly 9M-MBD was hijacked and crashed landed at Tanjung Kupang, Johor).The paint scheme was upgraded in the 1980s:
MAS even repainted one of their modern 737-800s in the old livery as part of their 40-year celebrations:
I even found a YouTube video featuring MAS's 737-200 : https://www.youtube.com/watch?v=TUP9OYSKjfk.Some notes about this livery:ResearchI did some research to see what this effort would entail. The aircraft in X-plane are 3D models, and the colour scheme of the aircraft is actually part of the texture of the surface. The textures are supplied as simple 2D image files, which the 3D objects reference. The 2d images 'wrap around' the shape of the 3D objects, which means when viewed as 2D images, they are not necessarily in the same perspective as when viewed on the 3D object. It seems to be the standard to use a single 2D image to cover many parts of the 3D object, with different parts of the image file being referenced by different surfaces. This is a sample of what an image texture looks like:The model makers will usually distribute a 'paint-kit' which is the source Photoshop .psd files they used to create the standard liveries. These usually contain separate layers for things like the windows and markings, panel lines and rivets. By separating them out in this way it makes it easier to paint the actual livery while preserving the extra 'features'. 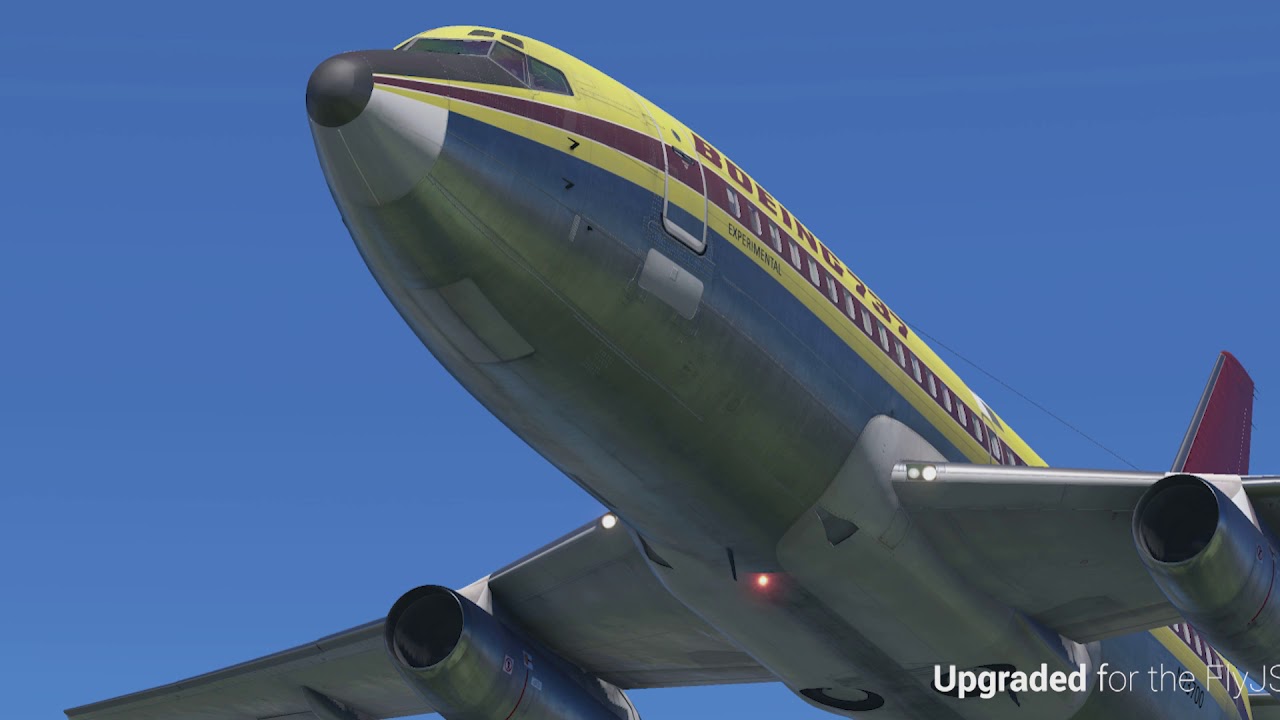 I decided to have a go at something much simpler, and tried a simple repaint of the ATR72-500. Using Gimp (a free image editing program) I added a new layer and poured yellow paint. I also cut and paste (with some rotation and resizing) some logos. This is the result: 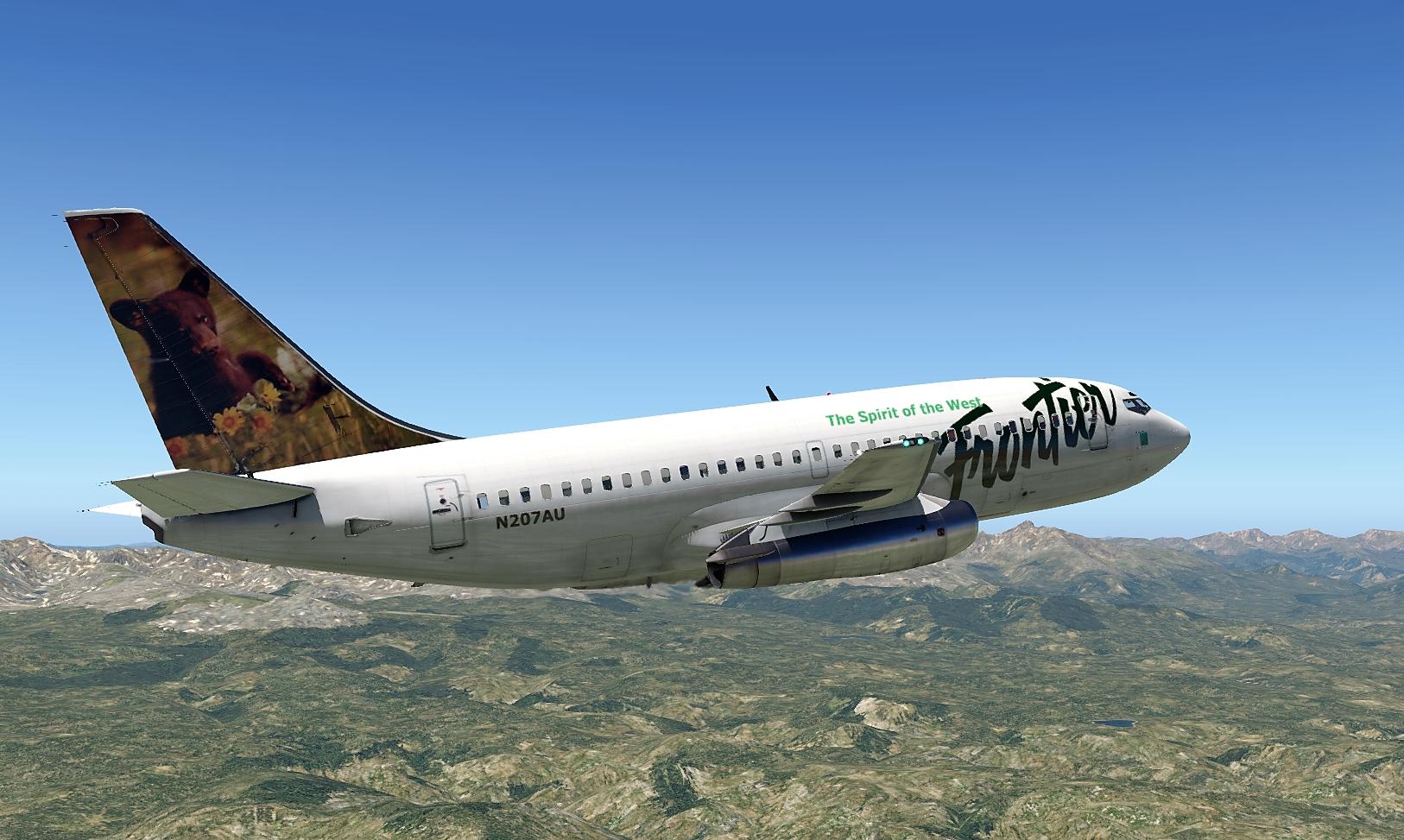 When the paint kit's layers are well designed, repainting the aircraft is quite easy.

Here's what the standard 'KLM' livery that comes with the 732 Twinjet looks like:
FlyJSim has released a paint kit for their 732 Twinjet, which can be downloaded here http://flyjsim.ipbhost.com/index.php?/topic/714-732-twinjet-livery-paint-kit/. I downloaded the paint-kit, and extracted the supplied .psd files into the folder X-Plane 10 / Aircraft / Heavy Metal / _FJS_732_TwinJet_115081036 / liveries / MAS 1972 / objects.Opening the .psd files in Gimp reveals that the layers for the standard liveries are also included. So you can refer to these as an example, and just enable/disable the appropriate layers to recreate any of the stock liveries. I saved the files as .xcf (Gimp's native format) and exported an 'untouched' version as a .png. This is what the aircraft looks like 'naked': 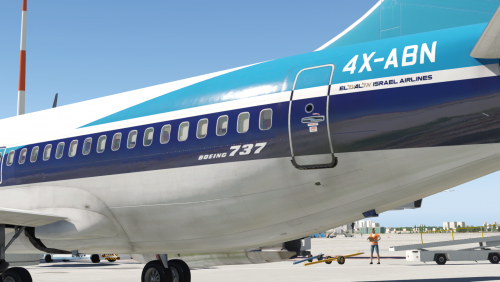 There's a layer group marked 'LiveriesCreatedHere' so I created a subgroup called 'MAS 1972' to store my work.
There are two front fuselages in this image. Comparing it with the actual model, the top one is the left/port side, and the lower one (with the cargo bay door) is the right/starboard side, but mapped in reverse. This means that any images/text that goes onto this needs to be flipped horizontally to appear correct.To get some idea of where the paint lines fell, I cut out a portion of the photo:
I then pasted this as a layer into the livery image, resizing and rotating it to fit over the top fuselage. I used the aircraft windows to align the two layers together (the front end doesn't align as in the paint-kit it is flattened whereas in the image the front curves away.
With the above, I now add a new transparent layer onto which I paint the white top half of the fuselage. I found the easiest way to deal with the curvature was to trace the line using the path tool (using bezier curves), and then filling them in with white. I used a similar approach for the red lines (color code #a93228). I copied the one side of the fuselage on to the other to ensure an exact match.
I used the sans font for the airline name -- it looks close enough after reducing the kerning, The flag was a cut and paste from wikipedia. For the Jawi text, I used this site http://www.ejawi.net/converterV2.php, typed in 'sistem penerbangan malaysia' (Malaysian Airline System in malay) and copied and pasted the jawi text back into Gimp, overlaid on a dark background.The new layer of paint is very flat and smooth. To get back some of the rivets and panel marks, I passed the new paint layer through the bump map filter, using the original base coat (inverted) as the map. This gave a nice effect.Before bump map:

After bump map:
There was an existing window layer in the paint kit, but it didn't seem to be working. The windowed areas were painted white but seemed to be blending with the topmost paint layer. First I selected the layer with the windowed areas and added white for the round portholes on the doors. Secondly, I created a new layer and selected a large rectangle area covering all the windows, and filled with with a light gray (#e1e1e1) to dark gray (#5c5a5a) gradient. I then used the first layer as a mask around the second layer, giving me gradients on the window panels:
The same processes were repeated for the rear part of the fuselage (the paint kit comes in three parts, front fuselage, aft fuselage, and tail and engines). I designated this aircraft 9M-MBD in memory of the crashed plane.For the tale section, I managed to find the MAS logo but it was inverted. That was easily remedied with Gimp, and I then had the tail section done:
One final touch ... from the photos, the aircraft model was written on the engines, something that the model did not come with. To do it right, I found the Boeing-style font (download it from

http://www.ffonts.net/BOEING-style.font) and installed it in my system, and painted in the model numbers.There's one thing I could not do though. The original aircraft's lower half is shiny metal ... which seemed a bit too difficult to paint in Gimp. The original base colour has some reflection-wash in it, though not enough to give a real metallic finish (I suspect this can't be done in texture but needs involvement of 3D lighting as well). So I left the lower half as it is.Here is the finished product:

It took me about 11 hours of work to come up with this, but mostly because while I have been using Gimp for croping and resizing images for over 20 years, this is the first time I'm actually doing anything serious with it. So it was quite a good learning experience.If you have FlyJSim's 732 Twinjet, you can download this livery at X-Plane.org forum.shahada AT abubakar.net